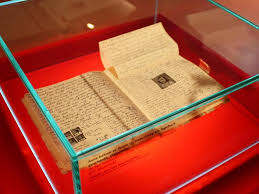 A challenge to the foundation that allocates the royalties from the book, “The Diary of Anne Frank” has been made by both a French lawmaker and a French scholar when they both published separate online editions of the book on Friday. The current copyright for the book expired on the same day.

In Europe and the U.S., in general the copyright of intellectual property is life of the creator plus 70 years after their death. However, Anne Fran Fonds, the Swiss foundation that was established by Anne Frank’s father was created to allocate royalties from the book to charity. The foundation had announced its intention to list Otto Frank as a co-author. Otto Frank passed away in 1980, which would have added an additional 35 years to the book’s copyright.

An Amsterdam court recently ruled, however, that the original text of Anne Frank’s diary could be copied for academic research.

French Parliament member, Isabelle Attard, whose grandparents also died in the Holocaust, published the entire Dutch text of the diary on Friday while Olivier Ertzscheid, who lectures at the University of Nantes, also published the text on his website as well.

“The intimate diary, written in a secret apartment in Amsterdam by a Jewish teenager, born German but stripped of her nationality, has finally entered the public domain,” Attard said in a statement on her website. “Seventy years after the author’s death, the whole world can use, translate and interpret these works, and use them to create new ones.”

“The Diary of Anne Frank” is the chronicle of a teenaged girl who spent two years hiding from the Nazis along with her family in an attic in Amsterdam until they were discovered and sent to a concentration camp. The work has served to inspire many other works in both drama and film. Anne Frank died in 1945 at the Bergen-Belson extermination camp.

There are plenty of questions regarding copyright, patents, trademark and all aspects of IP law. Protect your IP and prevent others from using your ideas for their own personal gain. If you suspect IP infringement, contact an intellectual property attorney today to protect your interests. Contact the law offices of Greenberg & Lieberman, LLC for a free consultation today.

Categories: Intellectual Property Blog, Litigation
Next Post
Is your Startup Performing Due Diligence on your IP?
Previous Post
Segway Files Lawsuits over Hoverboards