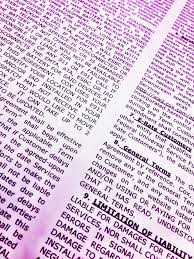 A clause in a contract at the Small Biz Dev Hackathon caused an uproar on Facebook and an apology from the sponsor. A hackathon is an event where programmers get together to brainstorm new applications and develop them in a short time frame. Normally at these events, the programmers get to keep all intellectual property generated.

However, a clause in the contract signed by the people at the event granted Capital One “an irrevocable, royalty-free, worldwide right to license to use, review, assess, test, and otherwise analyze” applications produced at the event. The hackers took to Facebook and complained, loudly, about this.

Capital One and another sponsoring group, AngelHack, were quick to apologize and said that they had provided an incorrect version of the agreement from a different event. AngelHack gathered the previously signed documents, destroyed them, and provided correct forms that said “participants own the rights to their projects they create at the Hackathon.”

It may have been an honest mistake, but it also demonstrates how important it is to understand your IP rights and how you may waive them by signing agreements and contracts. If you don’t understand a clause in a contract, ask for clarification or give it to an IP lawyer for interpretation.

If you need the services of an IP lawyer, contact Greenberg & Lieberman, LLC, for a free, no-obligation consultation.