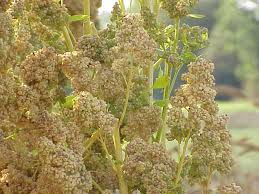 A fascinating story in Harper’s underscores the problems that can arise when natural products native to a region and IP rights start to intersect. You may have seen advertisements for quinoa in your local health food store, but quinoa is a battleground seed for the people of the Andes and the rest of the world.

The seed has the potential to solve a lot of food insecurity problems around the world. It is extraordinarily hardy and equally extraordinarily healthy. It is the only plant found that contains all nine essential amino acids. The Andean countries used to share research information about quinoa, as well as quinoa seed stock, but all that changed in the 1990s.

The Andean countries are among the poorest in South America, yet one of the world’s most important and profitable crops, the potato, originated from there. The Andean tribes had no idea that potatoes would be so successful, or that industrialized agriculture would lock local potato farmers out of making a profit off of their plant. Now farmers, and the Bolivian government, are very keen on keeping quinoa the property of the country, especially after a US university filed a patent for a new form of quinoa back in 1994. That patent has since expired, but food sovereginty and IP rights over quinoa are a hot-button political issue.

Bolivian farmers know that sharing more seeds with the world would increase genetic diversity and enable the breeding of local varieties. This would open up new markets and reduce food insecurity around the glob. But they are also keenly aware that if they lose control of the seed then they may lose the last cash crop that’s native to their country.

It is a complex intersection of human ethics, national pride, and the ownership of natural materials and genetic code that is well-worth the read. There may be no good solution to the problem of quinoa, but one possible way would be for Bolivia to lead the way in establishing strong IP protections for its varieties, of which there are thousands, then enter into agreements with other countries on the use of that IP that would let them share in the profits.

For more information about IP rights and how you can protect them, contact Greenberg & Lieberman, LLC for a free consultation.