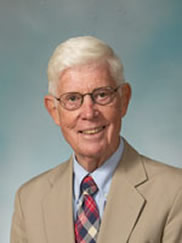 Biography
John B. Anderson had a long and distinguished career in law, politics, technology and education. He was a 10-term Congressman in the U.S. House of Representatives where he served the people of Illinois from 1961-1981. In that position, Mr. Anderson became the third-ranking Republican in the House. He also garnered 7 percent of the general election vote during a run for President of the United States as an Independent. During that 1980 campaign, Mr. Anderson earned enough credence to face off against Ronald Reagan in a nationally-televised debate.

Mr. Anderson was a regular on the visiting professor circuit, having taught at such institutions as Stanford, Duke, University of Illinois College of Law, Brandeis, University of Massachusetts and Oregon State University. He also is on the advisory board of the Electronic Privacy Information Center and longtime Chair of the Center for Voting and Democracy. In addition, Mr. Anderson was of counsel attorney with Greenberg & Lieberman since its founding in 1996. He is missed.